Fella Makafui suffers from mental disorder. A photo of Ghanaian actress Fella Makafui handcuffed to a hospital bed surfaced online over the weekend and has been fast going viral. The actress was captured laying almost lifeless in sickbed and her face looks like she was in a deep state of unconsciousness.

She had some tubes passed into her body through her right wrist. According to some unconfirmed reports making rounds on social media, Fella could be suffering from depression after her boyfriend, Medikal broke up with her.

Reports flying in some quarters have it that the actress was facing issues in her relationship with her boyfriend Medikal, leading her into that situation.

The speculation is fueled by Fella Makafui’s recent activity on her Instagram page where she deleted all her photos with Medikal except 3.

But a section of people on has a different opinion on the viral photo. It is believed by some section of social media users that it is a scene from a movie shoot.

Judging from the photo, the logical answer is that it is a scene from a movie but you never know with these celebrities, anything is possible. After all, he left someone for her and can equally dump her for another woman. See the photo below: 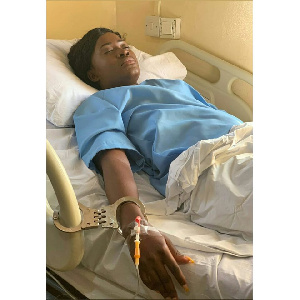